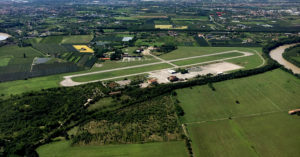 Verona Boscomantico Airport, named after Angelo Berardi (Italian aviator and military), is a small airport located a few kilometers from Verona. Due to its size, it is used exclusively for tourist flights, events, skydiving activities and helicopters, since the length of the runway allows take-off and landing only to small aircraft.

It was born as one of the bases of the Aviation section of the Specialist Battalion of the Royal Army. In January 1911 the Ausonia airship, the largest airship in the history of the Italian Air Force, was raised from here.

Boscomantico airport is located on a large area in the north of Verona, and was equipped in 1916, when the III Airplane Group was established, which participated in the First World War along with other squadrons.

In 1927 it was the seat of the 15th Airplane Group and, from 1930, of an Air Tourism Section. On 15 October 1939 the airport changed its name from Boscomantico to “Verona Airport”. Rebuilt after the bombing of the Second World War, it was home to American units for years.

Boscomantico airport: how to come 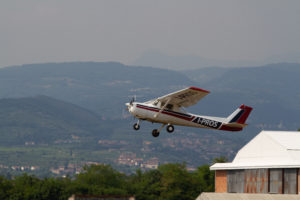 Asteraviation Flight Academy has an operating base on Boscomantico Airport, with staff present from Tuesday to Sunday (included). 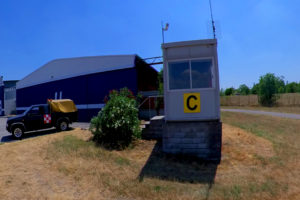 There is a service management consortium at Boscomantico airport.

Airport and outdoor operators can contact the service at the following telephone number: + 39 045 8103661

On the airport of Boscomantico there is a restaurant – pizzeria, open every day of the week.
From homemade pasta to desserts, the restaurant offers a wide and varied menu, with special and elaborate dishes.
The restaurant also has an unusual Lounge Bar, with a panoramic terrace on the Airport runway, ideal for seeing planes landing and taking off during the summer.

You can find us here too!